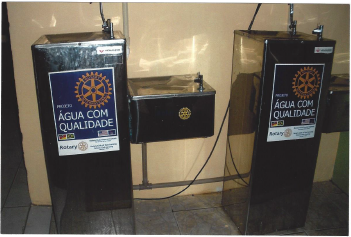 Both the Lansing and East Lansing Rotary Club’s donated $2,500, for a total of $5,000 towards the project plan of purchasing and installing 10 drinking fountains. The Rotary Club of General Camara took responsibility for acquiring, installing the fountains and educating the community on water preservation. In October of 2013 the funds were received from the United States. Due to the favorable exchange rate of the dollar to reais, Rotarians of General Camara were able to acquire one additional drinking fountain.

Installation of the 11 fountains commenced in November of 2013, and the project was completed in March of 2014 with a break between December and February for the annual school holiday. Follows is a list of schools and the number of fountains:

It is estimated that 1,500 students and 500 teacher, staff, administrators and visitors will enjoy the benefit of consistently delivered healthy and safe drinking water. In addition, the local Rotary Club coordinated talks by experts on the importance of water preservation and the rational use of water with the expectation that those messages would be carried home to families and communities.

Congratulations to all Rotary partners for a successful project completed.
For a complete copy of the report which outlined detailed costs related to this project may contact Dr. Omero Iung c/o the East Lansing Rotary Club

The End of Polio

On January 13th 2012, the world will reach a remarkable milestone in the fight to eradicate polio – 12 months without a single case of polio for the first time in India’s history.

It’s a remarkable achievement: and one that many thought would never be possible.

One of only four remaining polio endemic countries in the world, India has battled to get the upper hand in the fight against polio. As recently as 2009, India recorded the highest number of polio cases in the world. Many said it would never stop the spread. But since then, nationwide collaboration has changed this story.

Read the rest of this story here.