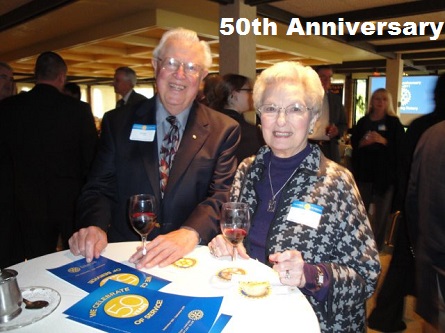 1961  East Lansing Rotary Club, sponsored by the Rotary Club of Lansing, received its charter from Rotary International on September 28, 1961 at the MSU Kellogg Center. The club was organized with 25 charter members.

2011  With 90 men and women as members, East Lansing Rotary Club  celebrated the 50 year anniversary of its chartering with an event at the University Club of MSU. The celebration occurred on September 28, 2011, exactly 50 years from the club’s charter date in 1961.

Today East Lansing Rotary Club continues its commitment to service with several notable on-going projects:  Playground In The Park Re-Imagined an enormous undertaking to make a new play structure at East Lansing’s Patriarche Park that would be safe, eco-friendly, long-lasting, and accessible; Weekend Survival Backpack Project, a school year project to supply backpacks filled with food for qualifying students in area schools to supplement family food supplies on the weekend; Haven House Annual Thanksgiving Dinner Fund Raiser, collecting funds to supply dinners for the current homeless families at Haven House for the holiday as well as stocking up the household supplies for “exit baskets” for families moving back into homes; and the Medal of Honor Memorial, funded to memorialize one of the few Congressional Medal of Honor winners from East Lansing.

Throughout the year the East Lansing Rotary Club undertakes other community service or fund-raising activities to benefit organizations locally and internationally. Signature activities include the annual Pancakes In The Park, and a Scramble for Scholarships.

The East Lansing Rotary Club is known for its diversity, often welcoming international scholars from Michigan State University as temporary members. The club also enjoys a positive reputation for hospitality (thanks to the University Club).  To learn more about East Lansing Rotary Club you are welcome to join us at a weekly meeting, and become a friend on our Facebook page: www.facebook.com/eastlansingrotaryclub.

This is a regional district of Rotary International in which the East Lansing Rotary Club is included. District 6360 serves 57 clubs in an area that roughly covers central and southwest Michigan. The district leadership is charged with managing club data for members, creating educational and training activities, an annual conference, and various communication vehicles.  To use the rich resources available to members and participating clubs, go to:  www.district6360.com

The original Rotary Club was organized in Chicago, Illinois by Paul P. Harris, an attorney. Harris wanted to enlarge his circle of friends and fellowship. His idea was to bring together men of different businesses and professions so they could recapture the friendliness of the small towns many had known as youngsters.

The name “Rotary” was chosen because the club met in rotation at each member’s place of business. Soon the club became too large for this and the membership began gathering for lunch. Camaraderie alone could not sustain the club and soon service to the community became the group’s binding strength.

With Rotary blanketing much of the globe, its service projects and international goodwill programs are felt by millions of men and women worldwide.    To learn more go to:  www.rotary.org

Monday From 12 to 1:30 Location: Via ZOOMMeeting The East Lansing Rotary Club meets twice a month on TUESDAY at 12 Noon. Please check the Event Calendar for current events and meeting dates. Visitors are always welcome! Learn More

For the membership directory, Rotarians should visit www.dacdb.com. Please contact rotary6360@gmail.com for assistance or other questions. Thank you!