The Community Relations Coalition (CRC) is proud to host the 2nd Annual Taste of East Lansing on Saturday, April 27 from 4-7 p.m. on the 300 block of Albert Street in downtown East Lansing. This tasty event will offer opportunities to sample local cuisine from sixteen different vendors, a silent auction, live music and entertainment, childrens activities and fun for students and families alike.
To taste the delicious samples from local vendors, food tickets may be purchased for $2. Food samples may be redeemed for one or two tickets each. Twenty-five percent of food ticket proceeds and 50 percent of silent auction proceeds will be donated to the Rotary Club of East Lansing’s Playground in the Park Re-Imagined project. The project will bring a new playground to Patriarche Park in 2014. The park is located in the Bailey neighborhood, one of the three neighborhoods supported by the CRC.
For a list of vendors and sponsors or for volunteer opportunities visit the Taste of East Lansing website at wealllivehere.org/tasteofeastlansing.

The Rotary Club of East Lansing and the Kroger Company have proudly teamed-up again this year to support East Lansing’s Haven House. Since 2009, the Rotary Club has raised money from its members to provide Haven House residents with Thanksgiving dinners and household supplies. Founded in 1983, Haven House provides emergency housing and support services for one-parent and two-parent families with children. The shelter helps families who are homeless prepare for permanent housing by developing and promoting self-sufficiency, stability, and financial responsibility. Rotary Club members donated a total of $770 towards this year’s project.

A certificate for the dinners was presented to Haven House Director Angie Mayeaux by the East  Lansing Rotary Club President Nathan Triplett at the Club’s November 19, 2011 meeting. “Our club is proud to support the good work that Haven House does to assist homeless families. They are a constant reminder to us of the good things going on daily in our community”, said Triplett.

“We’re really appreciative the efforts of Kroger and the Rotary Club to provide a wonderful dinner on Thanksgiving Day for our families. And, the “Exit Baskets” donated by the Rotary Club will be a big boost in helping families get settled into their own housing,” commented Haven House Rotary Club of East Lansing Executive Director Angie Mayeaux.

The Rotary Club of East Lansing has a long record of community service dating back to its formation in 1961. The Club has nearly 100 members and has supported a broad spectrum of community projects, like the Playground in the Park at Patriarche Park, the East Lansing Softball fields and Aquatic Center and the renovation of Haven House.

The Kroger Co. Headquartered in Cincinnati, Ohio (NYSE:KR) is one of the nation’s largest grocery retailers, with fiscal 2011 sales of $90.3 billion. Kroger operates 2,425 stores in 31 states; including five supermarkets in the Lansing area.

Every year, the East Lansing Rotary Club teams up with Kroger to provide the families at Haven House with thanksgiving dinners.  A certificate for the dinners was presented to Haven House Director Angie Mayeaux by the East Lansing Rotary Club President Nathan Triplett at the Club’s November 19, 2011 meeting. “Our club is proud to support the good work that Haven House does to assist homeless families. They are a constant reminder to us of the good things going on daily in our community”, said Triplett.  Below is a photo from Monday’s meeting. 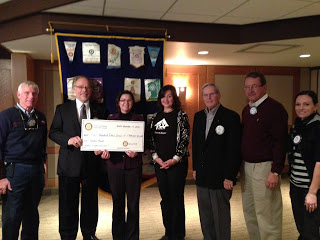 EAST LANSING — Sherrod E. Skinner, Jr. grew up in East Lansing and died as a young Marine Corps officer during the Korean War.

But the East Lansing Rotary Club doesn’t want him to be forgotten.
The club wants to create a permanent place of honor for what Marine 2nd. Lt. Skinner did to become the city’s only Medal of Honor winner.
The club, with the blessing of the city council, has taken on the responsibility of getting a memorial funded and built on the grounds of the Hannah Community Center.

Our annual Golf Outing is coming up Monday, September 10.  We wanted to take a moment to thank all of the great individuals and companies that are supporting this event through sponsorships.  They are:

“Scramble for Scholarships” is coming up on Monday, Sept. 10 at Forest Akers West, only four weeks away!  The proceeds from the outing go to provide scholarships to East Lansing seniors to help in covering their first year college costs.

You can also help by becoming a sponsor. For $100 you (or your company) name will be listed as a hole sponsor in the event program and will be recognized on our web site and other sites.

Also, we need prizes. Perhaps you (or your company) have an item that would be suitable for a prize – it doesn’t have to be golf-related, just anything of reasonable, practical value.
Based on preliminary indications, we’re heading for our largest turnout in years, so be a part of this effort. Even the East Lansing Schools Superintendent is putting together a foursome!

You can find a signup sheet for the event here!