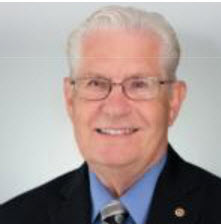 Bill’s interest in Rotary was sparked by his first mentor, his grandfather, who would take him out of school to attend a noon meeting at the Climax Rotary Club. His Uncle Ray is one of his current mentors at the Climax club where he joined in 2006. He is a past president of the club and supports its many activities. He has served in the role of assistant governor for the Rotary Clubs in Area 7 of District 6360 for several years.

He grew up in the Climax area and maintains close ties to the area. He graduated from Climax-Scotia schools and Michigan State University with a BS in mechanical engineering.

Bill was employed by General Motors, Hydreco, Stryker and Flowserve. He retired from Flowserve in 2005.

Married to Donna in 1964, they have three children and seven grandchildren who all live in the local area. Bill and Donna enjoy visiting with family, taking family vacations and keeping active in the Climax Methodist church. He is a Kids Hope mentor at the Climax-Scotts school, and an active member in the church. In the past, he was on the school board and a 4-H leader.

Hobbies, when there is time, include fishing and pistol target shooting.